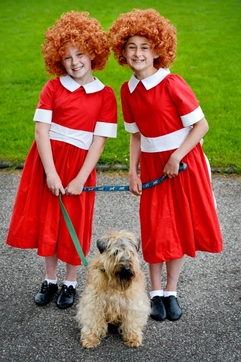 REVIEW 2: Annie
A STANDING ovation isn’t a bad way to finish a first night with Starlight’s bubbly, fun Annie production a perfect antidote to struggling with “the hard knock life”.

But at the heart of Wednesday night’s Eden Court opening night success was a well-cast Annie in 10-year-old Erin Moran.
It’s a big job to carry a whole show on your shoulders.

But with a slightly more subdued interpretation of Annie than the sometimes over-the-top ones of movies and professional stage shows, Erin’s clear singing voice, dainty dancing and sincere, realistic take on Annie made her performance a winner.

Read the full review at What's on North's Website

REVIEW: Annie
SOMETIMES you have to feel sorry for adults.
You might do a perfectly creditable job, hit every note, nail every line and pull off every joke, but throw some youngsters into the mix and you know who will get the biggest cheer.
So it was with Annie, which premiered on a Wednesday evening with Eden Court’s sweltering Empire theatre so hot that Miss Saigon might have been more appropriate than a show set in wintry New York.
Starlight, although still a relatively young company, has a core cadre of experienced cast members that can always be depended upon to deliver.

​Read the full review at What's on North's Website

Review: Annie – The Musical at Eden Court Theatre
As temperatures soared inside Eden Court it was the feel-good spirit of Christmas the audience were left with following a classy presentation of the much-loved musical, Annie.
Starlight Musical Theatre is the local amateur group with a well-deserved reputation for presenting highly professional productions and this show reaffirmed that reputation.
From the opening number, Maybe, sung sweetly by little orphan Annie, played on this occasion by Erin Moran, to the razzle dazzle Christmassy finale and rousing rendition of, Tomorrow, this was a night to remember.
Full of energetic dance routines and well-known musical numbers including, It’s The Hard Knock Life, Easy Street, and You’re Never Fully Dressed Without a Smile, the show highlights how many tremendously talented youngsters there are in this area. Molly (Katie Mitchell) the youngest orphan delivered a masterclass in comedy timing throughout and brought the house down delivering her, ‘Your days are numbered’ line to Miss Hannigan. 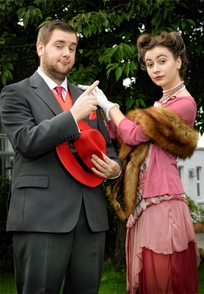 Annie star Liam finds it's good to be bad
​NEVER work with animals or children.
It is one of the most famous pieces of advice in the acting profession, but advice that Liam MacAskill has no problem ignoring.

After all, of any of his co-stars appearing in Starlight Musical Theatre’s production of Annie at Eden Court next week, Liam knows what it feels like to begin your stage career at a very young age.

His own debut speaking role came aged just five or six with The Florians Drama Club – the same age as some of the cast of Annie, the story of the incurably optimistic New York orphan whose live is transformed when she enters the home of billionaire Oliver "Daddy" Warbucks. 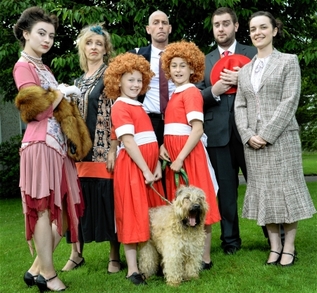 Event of the Week: For Starlight on stage
INVERNESS company Starlight Musical Theatre have decided to ignore the old showbiz advice about never working with animals for children for this year’s summer show.

Performing their version of Annie, the twice filmed Broadway hit about an irrepressibly optimistic orphan, requires working with both.
​
As well as the other young residents of the New York Municipal Girls Orphanage, Starlight’s show will feature not one, but two Annies in the form of Erin Moran, who will play three performances, and Tyra McGloughlan, who will play the other two. 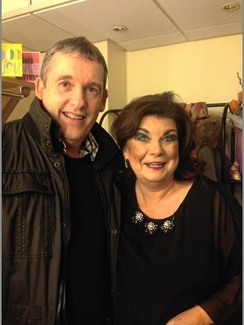 She has now passed on her advice and best wishes for the Highland amateur production thanks to her long-standing friendship with Starlight co-executive Peter Kelly.
They were both students at the Royal Scottish Academy of Music and Drama, now Glasgow's Royal Conservatoire, where Smith studied drama and Kelly studied singing.